Why business and civil society must act from now

Ever since the 3rd Assessment Report of the “Intergovernmental Panel on Climate Change” of the UN (IPCC) in 2001, it is clear that the current concentration of CO2 in the atmosphere (2015: more than 400 parts per million) is the highest rate since 15 million years. Of course it has already been significantly higher before but: that was another world.

15 million years long up in the 1860 years the concentration was stable at an average of 280 parts per million. Since the 1960 years it is well known that the man-made industrialization – and almost exclusively through the use of fossil fuels (coal, oil, gas) – is responsible for huge increase in the CO2 content in the atmosphere and thus for most of the global temperature increase. This currently stands at 0.8 °C above the pre-industrial value.

What does the 2°C target mean?

Quite clearly: the limitation to a maximum of 2°C warming by 2050 (ie only 1.2°C difference from the current state) is a purely arbitrary determination to pursue a goal, that the policy makers could agree on. This arbitrary objective has been incorporated as a basis for negotiations in more and more UN climate conferences since Rio in 1992. And important to observe:

even if we meet the 2° target the world will permanently be different from today.

Issued in May 2015 by the Helsinki Sustainability Center their “Manifesto For A Sustainable Planet” describes 6 important parameters that characterize this 2°C target:

What are the consequences of a higher by 2°C average temperature?


What efforts are needed to meet the 2°C target?

Immense efforts. This is mainly because since Rio 92 on a global political level nothing essential has been moved and simultaneously the dependence on fossil fuels has continued to expand successively and worldwide with partly substantial government subsidies. In the Mainau Declaration 2015 from 03/07/2015 at the end of the 65th Lindau Nobel Laureate Meetings a total of 36 Nobel Prize winners have appealed to start immediate measures to prevent a “wholesale human tragedy”.

We have another 35 years time and we will thus see the consequences of our actions. Only with superhuman efforts inhumane living conditions can be prevented. 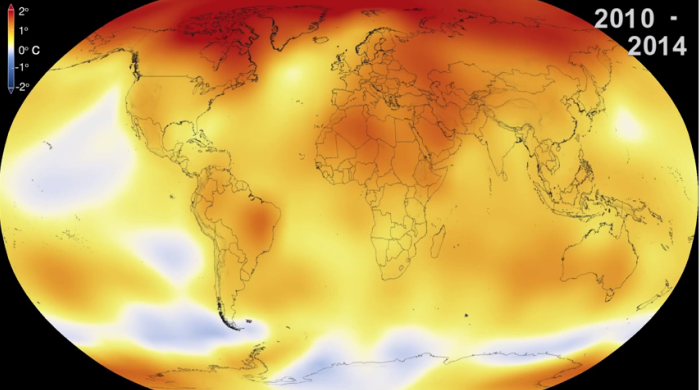 Source: NASA | Allocation of the average global temperature of 2010 to 2014 | 2° have already been reached in the Arctic