As an “art project for the chances and the development of urban society in the 21st century” Ark Metropolis was the greatest so-called pioneering project on the Tempelhof airfield. 2010 and 2011 were devoted to the theoretical preparation, while the focus of the years 2012 and 2013 was on the practical implementation.

The good efforts of the Berlin Senate for the development of a model project for citizen participation have been modified after the Berlin House of Representatives election in 2011 and pursued only with limitation. The focus of the Senate then was the implementation of a construction development of the former airport with the known result.

As a result, the focus of Ark Metropolis shifted to the establishment of participation as the missing 4th component of Sustainable Development. Overall, Ark Metropolis 2012 and 2013 could welcome more than 50,000 direct visitors to the project area who have participated in numerous events or enjoyed the recreational value of the pioneering field wanting to know more about the project.

The entire preparation was financed from own resources (55,000 EUR), money donations (20,000 EUR), donations in kind (15,000 EUR), time donations (530 000 EUR) and the European Social Fund ESF together with the Federal Government as part of the pilot project “civic work” (500,000 EUR). Financial support from the Berlin Senate did not take place, instead a user fee for the project area had to be paid to the Senate.

Activities during the preparations

In panel discussions and seminars on the Tempelhof airfield Ark Metropolis examines the question of how and by what methods the participation of citizens could effectively be integrated into development processes.

Methods and tools have been tried in numerous events at Tempelhof airfield to make possible the ad hoc or planned involvement of many people with different experiences, characters and cultural backgrounds.

The presentation venue has been used to implement artistic and creative ideas into reality within the limited construction law. In this way 50,000 visitors have been shown by what principles sustainable temporary construction can work. 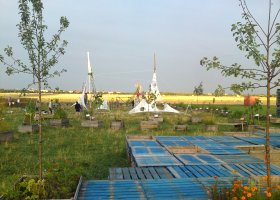